And it’s one of those stereotypical situations of me building it up way, way more in my head than it ended up warranting. Don’t get me wrong, I was stressed. Two days and two solid nights of sleep later and I’m still feeling tired from all the stressing. But, it was nowhere near as bad as I thought it was going to be.

Of course, I imagined worst-case scenarios. I imagined nit-picking about phrases and particular word choices. I imagined a 3-hour session of non-stop, rapid-fire questions. I imagined them plumbing the depths of my knowledge about not just the stuff I want to do for my thesis, but any of the material they covered in their classes (Human A&P, Vertebrate Evolution, Comparative Biomechanics, and Biology of Fishes) or any of the papers and topics I said I would cover in my syllabi (Bio-Inspired Design as well as my own takes on Comparative Biomechanics and Biology of Fishes). I imagined them asking me “Do you remember what they found in X and Y’s paper in 19XX?”

Literally, none of that. I don’t know if it was because half my committee is about to go on sabbatical, or because all four of them are incredibly, super nice people and they’re all close friends/colleagues, but it felt really informal for the most part. I think they asked what seems like ten or so ‘real questions’. Some of those questions were one-word answers, some were multi-part or had follow-ups and went on for quite a bit, and a few evolved into 15-minute discussions.

I’m torn between feeling so relieved and glad it’s over, and honestly, feeling a little bit cheated. I know I shouldn’t, but I do. I want them to know that I know more things, you know? Don’t get me wrong, some of their questions were incredible. For instance….

“What are the biomechanics of thermoregulation in mammals?” This was one we ended up walking through for a bit, because the best I got was radiative cooling and evaporation by sweating or panting (I was focused on physiological stuff, rather than biomechanical. Thanks, brain). The answer he was looking for was flow in pipes, first in the respiratory system, how your nasal passages and bronchi limit how quickly and how much air you can move at any one moment (and resistance varies between cases of steady and turbulent flow). And then about the circulatory system. This ended with him talking about how ‘flow in pipes’ sets the limit for how quickly horses can run. It’s not their running biomechanics that determines their max performance, but the fact that the pressure in the pulmonary artery (blood coming from the heart to the lungs) is so high when they’re racing that this literally causes the small arteries in the alveoli in the lungs to burst. If you see a horse with pink foam at their mouths after a race, it’s because their lungs are literally hemorrhaging.

I mean, that’s wicked cool (and sad), but of all the places I thought my quals would go, horses and their bleeding lungs wasn’t one of those places.

I guess I expected a lot more questions and I put so much time and effort into knowing and reviewing a lot of different things (my thesis covers a lot of different topics), that not using the bulk of that knowledge during quals makes me feel like my quals were….incomplete. Hopefully that feeling will fade with time.

My favorite question was from Stephanie (Pierce), of course. She brought in a tray of goodies. And by goodies, I mean a bunch of different fossil bits and models and dried skeletal material. I had to identify them and place them in a phylogeny.

And the stuff on the right was ‘draw a fish vertebra and then draw it sideways with muscles overlaid’, and the equation bits that are partially erased were “How do you measure flexural stiffness?”

So, from left to right: Petromyzontiformes (the lamprey), galeaspid (I was damn close, it was an osteostracan), the placoderm jaw piece (they are pretty distinguishable, google Dunkleosteus, you won’t regret it), Selachii (for the shark), Teleost (I knew that the two fish vertebra were most likely tuna, but I didn’t want to risk putting ‘Scombrid’ just in case that was too narrow, so I went wide and put Teleost–sue me), the lungfish fossil, Eusthenopteron (which was wrong, it was Osteolepis), Eryops (which I of course misspelled, but I got it right, dammit, and I’m proud of that), ‘amphibia’ for this one weird vertebra with the flat transverse processes (wrong, it was a crocodile and is therefore technically in amniota), and then ‘amniota’ for the tray with the nearly complete column (it was a cat, so I also technically got that one right).

I didn’t snap a photo of the cart, unfortunately, but I’ve put together some images to give you an idea.

I actually had a bit of trouble with the lungfish one and she knew I would, too. She brought a ‘hint’ with this one, a large fossil lungfish tooth plate, and she said ‘You liked a picture of me holding one of these on Twitter. Her picture on twitter below (originally posted by the MCZ’s account) and then something similar-ish to her hint: 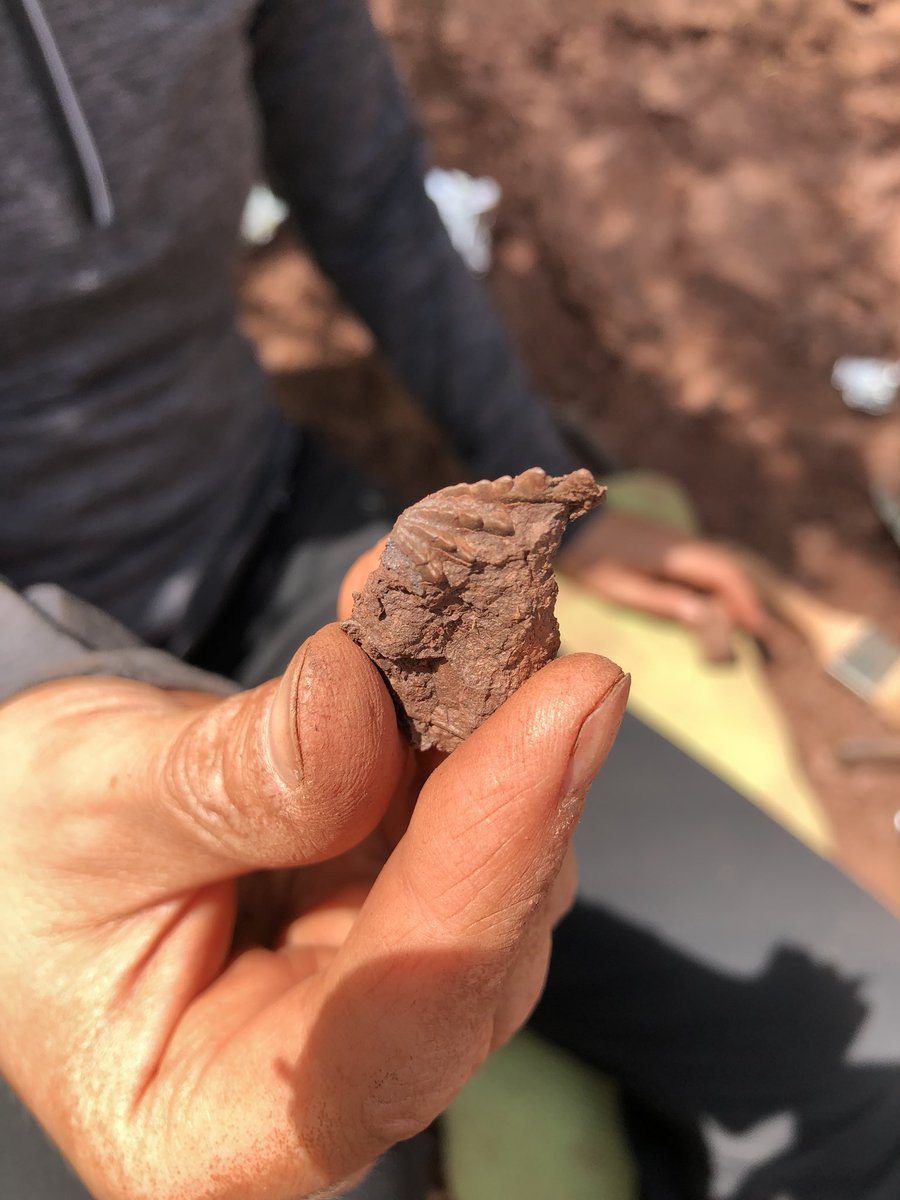 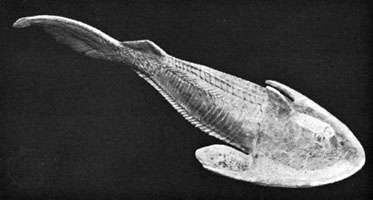 She brought a model of this fish, an Osteostracan. And I confused it for the fish below, a galeaspid. Obvious differences, like the big hole in the face, but I was close. They are literally right next to each other in the phylogeny. 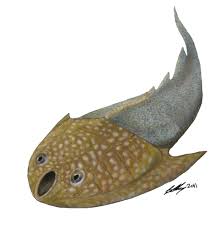 And then I’m pretty sure this is a picture of the actual placorderm jaw piece, it looks pretty similar.

So yeah, this was definitely my favorite question. There were follow-ups that got increasingly more specific and I stopped knowing the answers embarrassingly early, but I liked this one. It was fun.

Some other highlights: they all loved my syllabi. According to them, this was the first time one of my members had nothing bad to say about a syllabus, nothing that they would change. (He also said he would like to actually take my Bio-Inspired Design course!!!)  Another said that usually the quals syllabi they see aren’t real syllabi at all – nothing but a list of papers done in Word. I’m pretty sure I was beaming at this point.

One member finished up by saying that my thesis projects were really cool and that even though he won’t be on my thesis committee (which is different from my quals committee), he looks forward to seeing what comes of these projects.

Going forward, I definitely have some stuff to think about. They weren’t fans of the fact that I didn’t have explicitly stated Questions and Hypotheses. Since a good chunk of four of my chapters aren’t truly ‘experimental’ but are more engineering-oriented, I opted instead to present the work in terms of ‘Project Aims’. Having an “aim” of “make this thing(s) and get it to work right” followed by “Evaluate/investigate x,y,z using this model”  seemed like a decent way to go at the time. But I do see their point and I will have to come up with good, specific hypotheses before I start my later chapters. As they said, it’s old-school, but hypotheses have stuck around into modern science for a reason.

And at the end, after everything was said and done, they asked me to think about what I wanted to be when I leave grad school. You know the question. How will you market yourself to a job-search committee? My thesis chapters have engineering, biomechanics, comparative anatomy/morphology, and a bit of a dabble into paleontology, and I can see why they’re concerned about that. Personally, I don’t want to have to build an ‘academic brand’ for myself, to be known as someone who just does projects about/including X, Y, or Z.

I want to be known as a person who can jump into anything and get stuff done.

I think I’ve done a good job of that so far, especially in undergrad and the myriad of projects I was involved in. However, I recognize that long-term, the reality of actually continuing to be able to jump successfully becomes more and more difficult. There are some places where you can make jumps easily – between degree programs and between post-docs. But I’ve heard from so many people that once you start applying to be a professor, you better know what you are “the go-to person” for. You better have a brand and be able to say, I am one of the best in the world at this one particular thing.

A lot of the professors I’ve talked with who consider themselves to be “jacks of all trades” have warned me that trying to be a diverse scientist was easier back in the day, and it’s becoming increasingly more difficult. They see far fewer people who are able to pull it off.

“Jack of all trades, master of none, though oft’ times better than master of one.”

George is an excellent example of someone who has published in all sorts of fields, all sorts of projects about fish. But he made gradual shifts to get here. As he went through the years, his interests shifted, logically. When biorobotics became a feasible way to continue research about biomechanics, he made that jump into engineering. John Long Jr. is another professor who made that jump from biomechanics and comparative morphology to robotics. And now George has a lab that works on everything from tuna scale histology to robotics. His brand is that he’s a jack of all fish-trades, but it was a long road to get to this point.

“A jack of all trades, and still a master of one” is another variation I’ve heard, but strikes me as being just as hard to achieve.

I don’t know what my brand is going to be when all is said and done. But I do know the type of scientist I want to be. For now, that might just have to be enough.

So, that was my quals. For better or for worse, I am now, officially, a Ph.D. Candidate. Time to get ready for that PQS.